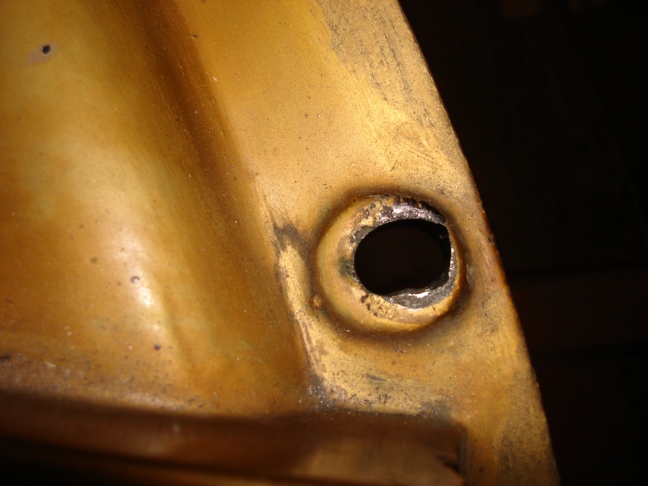 Working on the rebuild of a 1911 6’2” J&C Fischer, I ran into a small dilemma – some of the plate bolt holes had been re-drilled at the factory (as far as I can tell), probably because the original holes were too far from the outer rim – i.e. the original bolt when drilled would have been too close to the edge of the inner rim, or stuck out altogether.

All in all not a big deal, but I’m replacing the original bolts with the WNG plate suspension bolts and the washer is a little smaller than the originals, so the enlarged holes were going to show. (They’re really nice washers, so I wanted to use them instead of the old ones.)

Unfortunately I had already drilled for and installed the WNG bolts before I realized this.  I wasn’t too keen on trying to plug a stepped hole, so the question became how do I fill these guys in without losing the proper location for the hole? Since the washers are quite snug around the bolts, I could draw circles around the washers with them installed, like so:

I used a pencil here – not the most visible marking, but it showed up well enough. A black permanent marker would have been more obvious, but I didn’t feel like dealing with cleaning it off the washers…

I also had an idea that I could use dowels as mould so I wouldn’t even have to re-drill anything. All I had to work out was a way to get them in the right place…

The original unmodified plate holes were 7/16” and that dimension seemed to work well, so I glued some 7/16” dowel into some plywood cutoffs, making sure to keep them square to the base:

One thought on “Filling in oversized plate bolt holes – Part I”